Takehaya (タケハヤ) is the leader of SKY in 7th Dragon 2020 and childhood friends with fellow SKY members Neko and Daigo. He is often seen with Aitelle by his side.

Takehaya makes his first appearance with Aitelle to Unit 13 in Shibuya's forestized city when Unit 13 is on a mission. he declares a hostility to Murakumo and as a result Unit 13, and together with Neko, and Daigo start to become the rival Dragon hunters to Unit 13 and reveal their reasons being because of the human experiments that were conducted on him, Neko, and Daigo when they were children. The three of them were once Murakumo's human experiments as children under Natsume Hikasa's orders until they were able to escape; their fighting powers are a result of Murakumo's experiments.

Later, when Takehaya, Neko, and Daigo meet Unit 13 again, they decide to test Unit 13's strength as hunters, as they have grown to respect Unit 13 individually. After losing, SKY acknowledges Unit 13 and are later given shelter in a empty floor in the Tokyo Metropolitan Government Building.

In Chapter 5, when Murakumo leader Natsume Hikasa reappears as the Dragon hybrid Mizuchi as a result of experimenting with recovered Dragon DNA, Takehaya also decides to undergo the same experiment to gain enough power to stop the True Dragon Nyala. However, he soon disappears and Aitelle sets out to search for him.

Takehaya then reappears at the top of the space-warped Tokyo Tower before Unit 13 can reach the Nyala, and engages them in a fight to test who is strong enough to beat Nyala; when he loses, he permits Unit 13 to go and face Nyala. When Unit 13 beats down Nyala the first time, it is able to fully recover its health and is about to finish off the weakened Unit 13, but Takehaya then reappears and swoops in to attack Nyala multiple times before being hit by Nyala's powerful dragon breath and falling back down to Earth while wondering to Aitelle if he's been able to become a hero of justice. When Unit 13 talks to Neko and some other members of SKY, they'll wonder hopefully if Takehaya will come back one day..

After the credits sequence, Aitelle and Emel are shown approaching a fallen Takehaya on a street in Tokyo.

Post-game, Takehaya appears as a the final boss in the hidden dungeon of the Phantom Capital, a ghostly replica dungeon of made up of three areas in the game, the Tokyo Metropolitan Government Building's Entrance floor, a building, and a portion of the space-warped Tokyo Tower. He appears to be suffering from the side-effects of his Dragon Humanoid transformation and desires to be let to sleep, and challenges Unit 13 to a final match to settle things once and for all.

He makes another appearance as a post-game hidden boss, revived in the hidden post-game stage, where he challenges Unit 13 to another difficult battle so as to stop the future that he saw of him turning into a complete Dragon that would threaten the peace of the world, foreshadowing his future in Eden, 100 years before VFD's Eden. After defeating Takehaya, he will fade away once more, but will keep reviving, to which he prompts Unit 13 to keep stopping him from destroying their world over and over again...

By help of Aitelle sealing him with magic, Takehaya was able to survive into the far future of Eden, 100 years before the events of 7th Dragon III Code:VFD, where he is recorded for being a hero who fought in the Dragon war. He can be challenged to a battle by the player's party and after being beaten, he will give the Dragon Chronicles to the player, a book which tells how to kill the Dragons. 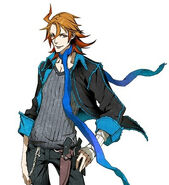