Like his sister, he is a citizen of USA and came to Tokyo to help Murakumo to drive the dragons out.

He is part of America's elite soldier forces group SECT 11 and is its initialleader. SECT 11 is ordered to Japan for an operation to eliminate the dragons under the recent US President's orders and there Shouji meets Squad 13 and underestimates their power as renown Dragon hunting heroes.

He dies in a dragon attack later and Izumi becomes the leader for SECT 11 after. 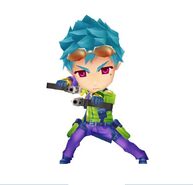