Rin Dojima (堂島 凛 Doujima Rin) is the captain of the Ground Unit of the Self Defense Forces, the regular soldier group in the game. While she is initially unhappy with Murakumo's presence and thus Unit 13, she grows to see them as reliable allies.

She has red hair and usually is in her SDF uniform, but outside work, she wears a casual T-shirt and jeans. Her true personality is actually that of a natural airhead and tends to feel shy when engaging with others socially. She cares much for her subordinates and felt extreme guilt when one of her men died under her watch.

When she and her SDF Ground Unit are fighting desperately against Dragons, one of her men is killed and she is unable to save him, causing her much guilt, but she later recovers with encouragement of her Unit members and Unit 13, and starts to view Unit 13 as a reliable ally. After this, she will give a homemade bentou to Unit 13.

Rin reappears in the year 2021 still part of the SDF, working alongside Murakumo Unit 13 to bring stability back to the currently rebuilding Japan. 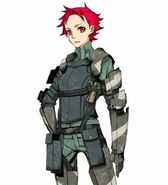