Kirino is Murakumo Director Natsume's aide and comes off as a eccentric scientist to other people, while his inventions are useful, he has a rather unreliable personality which makes him more sensitive and timid in times of danger. He helps research information about the Dragons and primarily explains Unit 13's mission details, acting as their mission provider.

When Director Natsume disappears, Kirino starts to falter and starts to feel uneasy, but continues to be Unit 13's mission provider.

When Natsume, now as the transformed Dragon human hybrid, Mizuchi, reappears at the base of Tokyo Tower and kills all the evacuated citizens there as well as Aoi and other soldiers Kirino, who was being protected by Aoi, has a mental breakdown from the confusion of his former superior's betrayal and the horrible deaths he witnessed. Mizuchi then seemingly leaves a shivering Kirino alive on a whim and flies away while the recovery team arrives to save him.

After Chapter 5, Kirino later takes up a stronger role in the game after regaining composure from shock of Natsume's betrayal and assists Unit 13 in their missions and continues acting as their mission provider.

In the final chapter, after Unit 13 faints from exhaustion from defeating Mizuchi and the True Dragon Nyala at the top of Tokyo Tower, the unconscious Unit 13 is brought back to base by SKY and remain unconscious in the infirmary. During this time, Kirino is one of the many people who come by the infirmary to visit the sleeping Unit 13.

After Unit 13 finally wakes up from their Navigator's urging, they visit everyone around the building and then meet Kirino in the meeting room floor, where even above all his research, he is truly glad to see them alive and back. He tells Unit 13 that after Mizuchi and Nyala were defeated, the Dragons around the world instantly vanished, and deduces that there was a direct link between these existences that kept the inferior Dragons existing.

He then proceeds to tell them about Murakumo's future on which they will continue to help the world rebuild, and starts to tell them their next mission details before covertly asking them out of curiosity as a researcher on how exactly Unit 13 made the Dragons disappear, but is instead teased by them, being told that it's a secret making him chase after Unit 13, still wanting to know how they did it.

In the game's starting chapters, he loses his right arm and experiences physical disabilities to the point of using a crutch for balance due to having been exposed to the new black Flowaro in attempt to save someone.

Kirino's new disabilities depress him significantly and he loses much motivation to support his allies, and remains in the Infirmary until an incident of acidic rain occurs, where he finally recovers to create acidic rain-resistant suits for Unit 13.

In Tokyo UE77 era, year 2100, 80 years after two dragon invasions, he is one of the last former Murakumo members to be alive at the age of However, he no longer calls himself Kirino, but rather under the codename of a mysterious hero "Blaster Raven", whom is publicly a vintage hero, which Kirino himself promotes, calling his fans Blaster Kids, and the goods he gives out Blaster Goods.

Even though his past comrades are long gone by now, he has extended his life with a prosthetic bodysuit which also doubles as his Blaster Raven costume. so that he could fight the dragons on the front lines, as he felt like he never did much in helping his allies fight the Dragons. He helps the player fight against the third wave of dragons in Tokyo UE.

In 2020, he has a youthful look and initially comes off as a 'mad scientist'. He places deep trust in his boss Natsume, and despite not showing it openly, she does seem to trust him more than others. When faced with a deadly Dragon threat from Mizuchi, he is shown to panic and become scared easily. After regaining composure later, he is able to reliably help his allies with his scientific information again.

In 2021, his parts his hair sideways as he has started to lose some hair over the past year, but is otherwise the same as he was before the 2nd Dragon Invasion in Tokyo. After being exposed to the new Black Flowaro species that arrived with the new wave of Dragons from a portal at the top of the Tokyo Sky Tree tower, Kirino is left physically disabled, losing his right arm and is forced to walk with a crutch to maintain his balance; this incident depresses him greatly and he loses motivation and feels unable to help Unit 13 in their new fight against the Dragons. However later, he recovers some of his composure when a shower of acidic rain starts raining down at a mission area Unit 13 is to enter, making it impossible to for them to conduct the mission, so Kirino is able to develop acidic waterproof suits for Unit 13 to wear and use in their mission.

In UE77, as the mysterious hero Blaster Raven, his human body is hardly visible anymore, mostly being covered by his prosthetic suit with only part of his green hair sticking out at the back of his helmet. His mouth also can still be seen. His memory of the past 80 years seems to be intact, as he stills remembers his precious allies from Murakumo.

Kirino became Blaster Raven because he felt as if he was always running away, leaving all the fighting to his allies, so he wanted to be able to fight rather than run.

While he behaves like a typical superhero most of the time as part of his hero role, Kirino still retains some of his unreliable personality and can sometimes revert back to his true nature when taken off-guard (as shown in a quest to get his Blaster Raven autograph for a Nodens scientist's son and the player mentions their own team name Unit 13 (of Nodens Corp), to which Kirino is startled slightly at the familiar name, before changing the subject quickly. 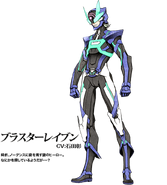