'Aitelle' (アイテル, Aiteru) also known as Aytel is a mysterious girl who follows SKY's Takehaya around. She appears once more in 7th Dragon 2020-II and reappears in 7th Dragon III Code:VFD living in future Eden with her older sister Emel.

In 7th Dragon (first game), 100 years before the Eden of Code: VFD, and far past the time of the 21st century, Aitelle is a powerful Mage and Emel's little sister living in Eden. She was also romantically involved with Takehaya during the war, having saved him from his wounds by keeping him sealed in the backroom of Masukami.

In present day Tokyo, Aitelle appears as one of Takehaya's followers in his youth group SKY and rarely leaves his side.

When SKY is given shelter inside the Tokyo Metropolitan Government Building, Aitelle also goes with them.

When Emel arrives to the Murakumo base, it is later revealed that she and Aitelle are the last survivors of their home planet, Hypnos, which was destroyed by the Dragons prior to Earth's invasion, several hundreds of years ago, and both Aitelle and Emel came to Earth to search for people who could hunt dragons. Takehaya is a person who Aitelle found during her search and someone she believed could hunt the dragons, which is why she followed and watched over him, hoping he would be the one who could hunt down all the Dragons.

When Takehaya undergoes the experiment into a human Dragon like Natsume to gain enough power to stop the True Dragon Nyala, he disappears, and Aitelle leaves to search for his whereabouts.

Takehaya then reemerges at the top of the spatially warped Tokyo Tower stopping Unit 13 in their tracks for a battle to decide who is strong enough to defeat Nyala. When defeated, he deems Unit 13 worthy and lets them pass to fight the True Dragon. When Nyala is severely weakened by Unit 13's attacks, it is able to temporarily incapacitate Unit 13 with a magical explosion and is about to deal a finishing blow to them, Takehaya quickly flies in with his spear and attacks Nyala, averting its attention to him and shooting him down with its charged dragon breath that it was about to unleash on Unit 13. Takehaya, weakened, falls down from the Tower wondering to Aitelle if he was able to become the hero she hoped he would be.

In the post-credits sequence, Aitelle and Emel find Takehaya lying motionless on a deserted street in Tokyo.

Post-main story (Chapter X), Aitelle leaves a anonymous system message in Unit 13's My Room Terminal telling them to go to the peak of the Phantom Capital's Tokyo Tower, where they will find "him" (Takehaya) waiting for them to put his weakened body to rest.

She reappears with Emel in the future, Eden, 100 years past the events of the first 7th Dragon game. She is one of the last survivors of Tokyo. 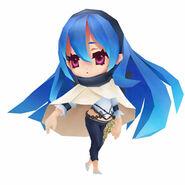